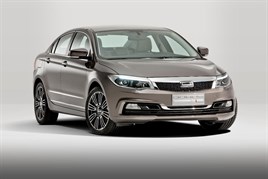 Qoros, the new Chinese car brand, has revealed more images of its Qoros 3 which will come to Europe this year.

Qoros will be showing off the new model, as well an estate version and Cross Hybrid Concept at the Geneva Motor Show in March.

Qoros has not yet confirmed whether it will be looking for dealers in the UK. There have been some reports suggesting 2016 for RHD models, other news outlets have suggested models could be available here before 2014.

A spokeswoman for Qoros told AM: “No decision has been made on whether the UK will get RHD models, but discussing whether this could be a possibility is on the agenda."

According to Marketing Week, Qoros is looking to establish itself as more of a premium high-tech player with comparable pricing to VW. This is an ambitious plan for an emerging brand from China which has not yet proven itself with the quality of its automotive products in the eyes of UK customers.

The Qoros 3 will go on sale in China in the summer and European sales will start later this year.

The launch of further Qoros models is then planned at intervals of approximately six months.

The brand is hoping to achieve top scores in European crash tests for its models.

Two four-cylinder 1.6-litre petrol engines will be available at the launch of the Qoros 3 in China, both of which feature VVT (variable valve timing). The naturally-aspirated unit delivers an output of 126bhp and 155 Nm maximum torque.

The turbocharged version offers 156 bhp and 210 Nm maximum torque. Both engines are combined with a six-speed manual transmission as standard, with an optional six-speed dual clutch transmission available for both. A stop-start system will be available from launch.

All models will feature an eight-inch touch screen infotainment system as standard.