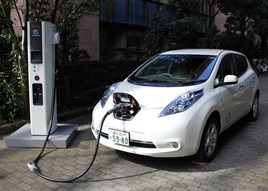 The Government has announced it will fund 75% of the cost of installing an electric vehicle charging point at any home address.

It comes as part of a £37m scheme to make it easier to own and run an electric car.

Working with local authorities, the new scheme will see also a 75% contribution from taxpayers to the cost of installing public chargers such as rapid chargers and other on-street chargers.

This includes supporting the cost of installing charging points at railway stations, while any public-sector organisation – such as the police, NHS, local government – wanting an on-site charging point will now have the installation carried out for free.

Last month the EU unveiled proposals to mandate a minimum number of public charging stations, which could compel the UK to install 122,000 points by 2020.

Currently there are only around 7,500 public charge points available through a range of public and private charging networks.

The full funding package includes up to £13.5m for homeowners looking to install a domestic charge point, £11m for local authorities to cover on-street charging for residents and rapid charge points on the road network, and £9m for train operators to fund chargers at railway stations.

A further £3m has been set aside to fit charge points on the public estate, while the government has also committed to reviewing whether departments should be compelled to order low carbon cars through central purchasing.