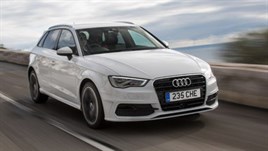 It believes new models like the new A3 Sportback will help it reach its target. The five-door Sportback and three-door A3 are expected to account for more than a fifth of Audi's UK business.

The Sportback goes on sale in mid-March with three engines and three trim lines priced from £19,825. Later in the year three more engines will be added along with quattro all-wheel-drive versions and a wider choice of models with the S tronic double-clutch automated gearbox.

The first A3 saloon, high-performance S3 versions and a new 181bhp 2.0-litre diesel are also in the pipeline. Next year there will also be a replacement for the A3 Cabriolet.

Audi claims to have invented the concept of the "premium compact hatchback" with the first A3 in 1996. They have continued to dominate the sub-class in the UK until 2011 when the BMW 1 Series was the top-seller for the first time.

The battle to be top dog has now become a three-way fight with the arrival of the first conventional Mercedes A-Class hatchback.

"We have been in transition for a couple of years, first with the introduction of the A1 in 2011 and then last year with the run-out of the previous A3," Audi says.

"But it's a fight we think we are winning again - and victory in the ring would be hollow without worthy opposition."

AM Poll
What is your take on the car retail sector's ongoing vehicle supply shortages? Please leave a comment
Vote
View all
3507