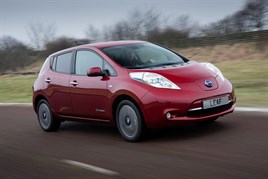 Nissan has improved the battery range of its Leaf from 109 miles to 124 miles with its next model and production for European units will move to Sunderland in the spring.

Nissan has made over 100 changes to the new Leaf with an increase in interior space, better charging performance, more equipment and customers will now have a choice of three trims– Visia, Acenta and Tekna.

The new Leaf will also come with a new warranty plan for the batteries. As well as covering the batteries against defects in materials and workmanship for five years/100,000 kms, they will be covered by a ‘State Of Health' clause which covers gradual capacity loss.

Over time, lithium-ion batteries lose a percentage of their capacity, a natural phenomenon. But should battery life reduce quicker than anticipated over the same warranty period it will either be repaired or replaced.

The new Leaf will go on sale across Europe in June and will soon be joined by pure electric versions of the NV200, to be called e-NV200, in both light commercial van and seven-seat combi versions. Development is also underway on a dedicated EV taxi based on the e-NV200. An Infiniti EV is expected in 2015.