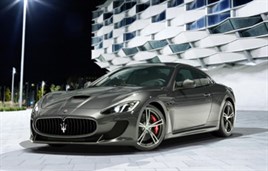 Maserati has updated its rear-wheel drive GranTurismo MC Stradale for 2013 with more power and space.

The new model will now have two back seats instead of the roll cage which was on the previous model. Power has been revised on the 4.7-litre V8 to 454bhp, up from 444bhp.

Maserati says fuel efficiency and CO2 emissions have also been improved, although no figures have been released.

The engine is mated to a six-speed paddle-shift automatic gearbox and top speed it 188mph and the GranTurismo MC Stradale will hit 0-62mph in 4.5 seconds.

The revised Maserati GranTurimso MC Stradale will be officially unveiled at the 2013 Geneva motor show next week, and it will go on sale in summer 2013, replacing the two-seater MC Stradale. Prices are expected to rise slightly from the current £110,000.