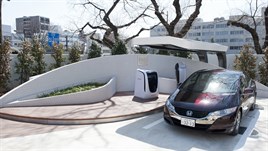 There could be 1.6 million hydrogen-powered vehicles on UK roads by 2030, according to a joint Government-industry study.

The forecast is made in an interim report commissioned to evaluate the benefits of hydrogen fuel cell electric vehicles (FCEVs) and ensure the UK is well positioned for their commercial roll-out.

Some dealers have found the media focus on electric vehicles over the past two years to be frustrating due to the technology only ever being taken up in small numbers by customers. As of December 31, 2012 there have been 3,021 claims for the Government's Plug-in Car Grant scheme which offers grant of 25% towards the cost of the vehicle, up to a maximum of £5,000. The scheme has been in place since January 2011.

The study on hydrogen cars from UKH2Mobility provides a ‘roadmap’ for the introduction of vehicles and hydrogen refuelling infrastructure in the UK.

“It has the potential to create really significant new economic opportunities for the UK, to diversify national energy supply and to decarbonise road transport. The findings released today demonstrate that hydrogen fuel cell electric vehicles can make a significant contribution to this.

“Successful commercialisation of the technology will require Government to work in true partnership with industry. Our international rivals are looking to steal a march in this area and so UKH2Mobility recognises the importance of prompt action to ensure the potential benefits are realised by businesses and consumers in the UK.

“We already have a strong automotive sector and must ensure it stays that way. Opportunities for the UK to take a leading role in low carbon technologies will be looked at as part of our auto industrial strategy, published later this year”.

Consumer - up to 10% of new car customers will be receptive to fuel cell vehicles when first introduced, attracted by the newness of the technology and environmental considerations. “Early adopter” interest will need to be fostered and converted into sales to build confidence in and support for FCEVs, as the first models become available in world markets within the next three years.

Vehicles - initial uptake of FCEVs will progress as models make their way on to the market and the fuelling network matures. The roadmap shows that once mass FCEV production is established, bringing costs down, there is the potential for 1.6 million vehicles on UK roads by 2030, with annual sales of more than 300,000.

Infrastructure - a co-ordinated network of hydrogen refuelling stations will need to be established, focusing at first on national trunk routes and heavily populated areas. An initial roll-out of 65 stations would provide sufficient coverage in line with early vehicle sales, with the network growing in line with the number of FCEVs on the road to provide 1,150 sites by 2030.

Environment - the roadmap shows that, based on the uptake figures above, FCEVs could reduce UK annual total vehicle CO2 emissions by three million tonnes in 2030. Replacing diesel vehicles with FCEVs could also save between £100 million and £200 million a year in the cost of damage to air quality caused by vehicle emissions by 2050.

Fuel production - FCEVs produce no harmful tailpipe emissions, but some forms of hydrogen production do generate CO2. Using a range of manufacturing methods can deliver hydrogen at a cost that is competitive with diesel, with 60% lower CO2 emissions in 2020, improving to 75% less in 2030. Hydrogen production will be on course for zero emissions by 2050, at which time FCEVs could have a market share of between 30-50%.

Investment - a basic initial network of hydrogen refuelling stations is required to encourage early adoption of FCEVs and there will inevitably be a lag between the creation of this network and there being sufficient FCEVs on the road to make it financially self-sustaining. Phase 1 of he project estimated the total finance needed to be around £400m to 2030. Phase 2 will be focussed on both reducing this figure and considering different models for delivering it.

The final report of Phase 1 is due to be published in March. Phase 2 of UKH2Mobility will then use the information and roadmap produced in Phase 1 to develop a detailed business case and specific actions for participants to commit to.

AM Poll
How has the COVID-19 pandemic affected your attitude or mental health? Please leave a comment
Vote
View all
675