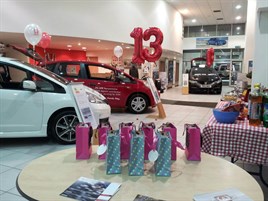 Fears that motorists will steer clear of this month’s ‘13 plate’ new cars are unfounded, say CAP.

Nor does the company believe superstitious motorists will cause increased depreciation via reduced demand for 13 plate cars by avoiding them in the future used car market.

Research over recent weeks has revealed an increase in ‘cherished plate’ enquiries for cars registered this month, which CAP believes is partly fuelled by a minority of superstitious motorists.

Motor dealers have also been reporting conversations with customers interested in avoiding a 13 on their registration plates.

CAP’s large industry customers – many of whom use CAP to measure and forecast the depreciation on their fleets – have also asked the company’s experts whether a 13 plate will make cars less desirable in the future.

However, the CAP view is that it will have an almost immeasurably small impact on the demand for 13 plate cars as the sight of them on the road becomes increasingly familiar.

CAP will monitor the prices achieved in the used market by 13 plate cars as they begin to enter the used market in the months ahead, to see if there is any discernible impact from triskaidekaphobia (fear of the number 13).

Black Book Live senior editor, Derren Martin, said: “The key thing to remember is that customers make the decision to buy the car first and what appears on the plate is an afterthought.

“For this reason we believe retail sales are not likely to be affected in any significant way – either this month for new cars, or in the future for used cars.

“For fleet and business users, even though they are more likely to be aware of the numbers on the March plate, their car replacements are governed by fleet replacement cycles, which means they have little choice to defer purchases until the next plate.

“We have certainly been receiving anecdotal reports of some motorists expressing reluctance to take a 13 plate and it would also appear that there has been a recent increase in demand for private plates. This will no doubt partly be fuelled by those few retail customers who have realised the 13 plate is coming and are responding to personal superstition.

“There will also undoubtedly be a few people who will see that the numbers ‘1’ and ‘3’ can be spaced to make the plate appear to read as a ‘B’ even though altering the spacing of letters and numbers is illegal.

“But in our view, this is more of a quirky story than a significant issue for motor dealers or other automotive operators. We therefore believe that the value of a 13 plate car will not be adversely affected in the future.

“We will of course monitor the performance of 13 plate cars in the market over the coming months and will report on our findings should evidence emerge to the contrary.”

Alfa Romeo is giving away lucky Cloverleaf key rings to the first 200 customers that buys a 13-plate car to dispel any superstitions about the traditionally unlucky number.