Average new car fuel efficiency improves by over 25% since 2000 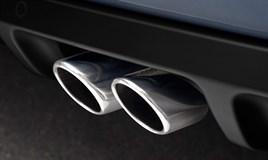 New car fuel efficiency has improved by an average of 26.5% since 2000, according to new data from the Society of Motor Manufacturer s and Traders (SMMT).

The number of VED-free, sub 100g/km CO2, cars rocketed in 2012, more than doubling their share of the market to 8.2% in the year.
This trend towards low emissions and maximum fuel efficiency was reflected by the number of cars registered with less than 130g/km of CO2 emissions.

This emission level is the target average limit set by Europe for manufacturers to achieve by 2015 and last year more than half the market - 55.4% - met the level or improved on it.

Analysis of the emissions of all new cars registered in the UK showed a continued trend in falling CO2 and improving fuel efficiency.

Looking at the rate of progress made over the past five years, average emissions across all segments (car sizes), dropped almost 20% with larger vehicles making the biggest improvements.

Matthew Croucher, author of SMMT's latest emissions report, said: "The industry can be proud of the progress it has made in reducing CO2 emissions and improving fuel efficiency by more than 25% since 2000.

“The UK motor industry recognises its responsibilities and the industrial opportunities from the transition to ultra-low carbon vehicles.

"Future environmental and economic success will be determined by sustained investment in new technology, R&D, infrastructure and consumer incentives. We are seeing improvement in conventional technologies and the emergence of a range of alternative technologies, creating one of the most innovative periods for the global automotive industry."
Achieving record market shares, diesel and alternatively-fuelled vehicles (AFVs) continued their rise in popularity, taking 50.8% and 1.4% of the 2012 market respectively.

Though market development is in its earliest stages, electric and plug-in vehicle registrations rose 111.8% in 2012 to 2,237 units, aided by the introduction of new models and the Plug-In Car Grant. As of December 31, 3,021 claims have been made through the Plug-in Car Grant scheme.