UK continues to be only Euro market in new car growth 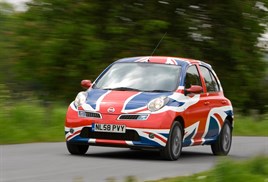 The European new car market continues to contract, with sales 10.3% less in February and 9.5% less year-to-date than a year earlier.

According to figures released today by Jato Dynamics, Great Britain is the only ‘big five’ market to have experienced growth in 2013 with sales increasing 7.9% in February (versus 2012) and 10.3% year-to-date.

None of the top 10 brands recorded increased sales in February. BMW is the only brand to have achieved a year-to-date increase in sales (4.7%).

Outside the top 10 the story is similar to January, with Dacia and Mazda being the brands achieving the greatest increases in sales. Honda has seen some success, thanks to the new CR-V model and strong British sales of the Civic, and Jaguar also recorded increased sales in February. 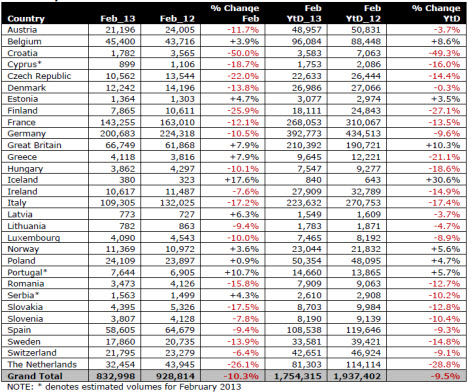 The Volkswagen Golf continues to be Europe’s best-selling car, despite sales falling 0.3% compared to February 2012, and 9.1% year-to-date.

The Renault Clio takes second place with sales up 17.5% on a year ago thanks to a strong sales start for the latest model.

The Volkswagen Polo achieves third place, the Peugeot 208 fourth place and the Nissan Qashqai takes fifth place to complete the 'top five'. The Opel/Vauxhall Corsa’s ninth place in the chart means B-segment models account for half of the top 10 in February.

AM Poll
Will new car supply be restored to normal levels in 2022? Please leave a comment
Vote
View all
2660