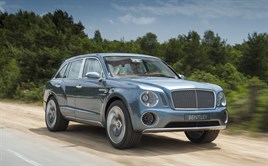 An SUV is crucial if Bentley is to achieve its goal of 15,000 sales a year by 2018, says CEO Dr Wolfgang Schreiber.

Sales were up in all regions and for all model series, meaning that Bentley is not reliant on any one car or area for the additional growth it expects in 2013.

"This approach also underlines our intention to enter a new segment with an ultra-luxury SUV," said Schreiber. "The business case for this project is extremely positive. If we get the green light we will enter the market in 2015-16."

Board member for sales and marketing Kevin Rose believes an SUV could add between 3,000 and 4,000 sales a year to Bentley's global total. The USA and China would take about half the production, with Russia a strong third market. Bentley is in the process of adding 20 new dealers to its Chinese network to tap the growth potential there.

Bentley says its planned SUV would establish a new market segment, with a starting price that matches the most expensive Range Rover or Porsche Cayenne.

"A lot of our Flying Spur customers come from the Mercedes S-Class. It is less about functionality and more about desire," he said. "It would be the same for the SUV. Globally, sales of the Range Rover are about 28,000 a year. Many of our customers already have a high-value SUV. If we could convert a few we would have a very solid business case."

Schreiber says that Bentley has already invested "a high three-digit number in millions" on the SUV, which would be "modern with lots of new technology" and "luxurious, powerful and torquey" in the grand Bentley tradition.

No name has been chosen for the car yet, and Bentley does not have a heritage in SUVs to fall back on as it has with its saloons and coupés. "It has to be something that would work in 50 countries, but that is the least of our worries," says Rose.

An extension of the flagship Mulsanne range, possibly linked to the cabriolet concept shown at Pebble Beach last year, is also under consideration. "We will investigate what we need in the Mulsanne line-up," says Schreiber. "This is one idea, but we have at least two more."