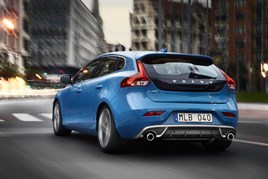 Volvo will not be including the DRIVe badging on its future models in favour of promoting that all of its models are as efficient as possible.

The tactic is a similar approach to BMW’s EfficientDynamics where all models feature the technology but there is no specific badging.

The company began phasing out the DRIVe models last year and will complete the process in May with the introduction of its 2014 model year range, which includes a diesel hybrid, based on the V60 D6 AWD.

Iain Howat, head of product and pricing, said: “We are taking away DRIVe because reducing CO2 is now an all-encompassing strategy.

"It is also about the interior as well as the manufacturing process and recyclability. We already have climate-neutral factories, and are using things like chrome-free leather in our choice of materials. And every Volvo is 85% recyclable."

Volvo is now looking for new uses for the lithium-ion batteries in the diesel-electric V60 after they will no longer hold sufficient charge to drive the car on all-electric power.

The batteries come with a warranty of eight years or 100,000 miles, but Howat says they have been "designed to last the lifetime of the car".

He added: "During the development tests they have done 5,000 charge cycles from empty to full. That equates to 15 years of battery life in the hands of owners."

The V60 hybrid will start out as a low-volume car - 6,000 will be made this year, only 150 of which will come to the UK - to be sold in 19 European countries. But it is built on the same production line as V60s with internal combustion engines, so there are no restrictions on supply if demand exceeds expectations.

And it is not likely to be the last hybrid from the Swedish company. The electrical part of the powertrain would work equally well with a petrol engine, Howat says. Volvo has already shown a concept model to this effect and hinted that it will go into production. That would allow Volvo to introduce hybrids to diesel-resistant markets like the USA and China.

"Technology is moving forwards very quickly. We have already done an awful lot in a very short space of time and we will continue to evolve," says Howat.