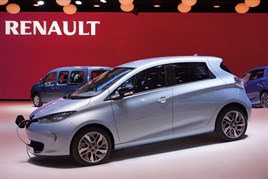 Renault could include the price of its batteries in its electric vehicle models and drop the current strategy of leasing them separately, according to Renault boss Carlos Tavares.

Tavares told AM-sister title Fleet News he would drop EV battery leasing if customers would prefer to pay for the battery in the purchase price of the car.

Head to Fleet News to read the full interview.

Renault revealed prices for its new Zoe electric vehicle last week and it will be priced from £13,650 including Government subsidies and customers will have to pay at least £70 a month for the battery rental.

The Zoe will spearhead Renault’s electric vehicle range and the French brand is hoping the new model will be popular with a wider audience in comparison to its very niche two-seater Twizy.

The Zoe has a potential range of 130 miles and a full charge on domestic mains power takes nine hours. A fast charge can restore the Zoe to 80% in 30 minutes.

The Zoe is available to order now and will arrive in Renault showrooms from June 7.