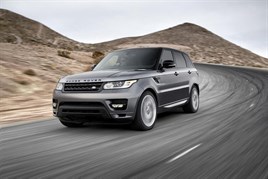 The next Range Rover Sport has been revealed and customers will be able to have an optional third row of seats and four-cylinder engine.

The muscular design of the new Sport takes heavy influence from the successful Evoque and design boss Gerry McGovern has said the focus for the new model in terms of design was revolution rather than evolution.

The Sport is lighter than the outgoing model with 420kg of weight saved on the chassis reducing total weight to 2,115kg.
Sport customers will have a choice of two engines from launch – a  supercharged 5.0-litre 508bhp V8 petrol engine and a 3.0-litre 290bhp SDV6 diesel engine.

The engine line-up will be expanded in early 2014 with the addition of a 3.0-litre 256bhp TDV6 and high performance 4.4-litre 337bhp SDV8 diesel engine. Range Rover will also launch a diesel hybrid model in 2014.

The fastest model will hit 0-62mph in 5.4 seconds and the slowest model will still make the sprint in 7.1 seconds. The most efficient Sport will have CO2 emissions of 194g/km. All petrol and diesel engines in the new Range Rover Sport are paired with the ZF 8HP70 eight-speed automatic gearbox.

The weight reduction measures on the new model open up the future possibility for the fitment of a smaller, lighter power plant, such as a four cylinder engine.

The wheelbase has increased slightly by 178mm to 4,850mm overall and while that might not sound like much, customer can now specify two forward-facing jump seats in the boot and all five rear seats can fold flat.

The new Range Rover Sport goes on sale this autumn, with prices expected to start at £50,000.