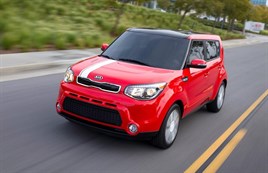 Kia's Soul, appearing in second-generation guise at the New York Motor Show, has the potential to become the Korean brand's equivalent of the Mini says the man who headed the design team which created it.

"It might be tough to make it that story at this stage because we don't have the heritage," says Tom Kearns, the chief designer at Kia's American studios in California. "But it's already an iconic vehicle for us. Maybe in 40 years' time the design team will be looking back at the original Soul and trying to re-create it."

But Kia will need more than that if Soul is to even begin to emulate the Mini. Kia has already shown a couple of ideas how it might expand the range with the three-door Track'ster and convertible Soul'ster concepts, and Kearns says there have been more and they are being seriously considered.

"Kia has a pretty good track record of producing a lot of its concepts and we are thinking about some of those other possibilities with Soul," said Kearns. "At least one or two are very serious. For the new Soul we have already taken a lot of elements - internal and external - from the Track'ster."

Kearns believes Soul is the model which has the greatest potential to change Kia's profile from that of a rational brand to an emotional one. "I think we have already elevated ourselves to the point where we can be taken more seriously," he said.

"When we are designing cars we look at a lot of other models which are not direct competitors - not Ford and Toyota but Audi and BMW."

The new Soul goes on sale in America this autumn, but it will be early in 2014 before it makes it to the UK. It will be joined by a refreshed Optima saloon which is also on view in New York, three years after the debut of the original model at the same venue.

"We wanted to stay ahead of the competition, but the changes were also driven by some of the new technology available," says Kearns. "A larger touch-screen became available, plus the front-end LED daytime running lamps and fogs. The Optima has been very strong for us right from the start and design is one of its major strengths."

AM Poll
Will new car supply be restored to normal levels in 2022? Please leave a comment
Vote
View all
2904