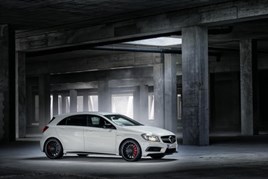 Mercedes-Benz is planning to increase sales of its high-performance AMG models by 50 per cent based on the 2011 total of 20,000, to mark the sub-brand's 50th anniversary in 2017.

The UK is currently the fastest-growing market in the world for AMG. Last year's sales total of slightly over 2,200 was more than double that of the year before. And it does not include 'AMG Sport' and 'Engineered by AMG' trim versions.

Ola Kaellenius, AMG chief executive, revealed on the eve of the Geneva show that the performance division has plans to launch 30 new models in the next four years to help achieve its ambitious sales targets.

There will be increasingly more powerful engines delivering increasing levels of efficiency, and more and more all-wheel-drive models.

Two of them were on view at an invitation-only preview evening. Kaellenius revealed the A45 AMG with the help of  R&B superstar Usher, but lurking in a 'box' at the venue - and definitely not to be photographed - was the AMG version of the new CLA coupe.

The A45 is the entry to full-blown AMG ownership and the first transverse-engined car from the Affalterbach performance specialists.

It is powered by a 357bhp 2.0-litre four-cylinder turbo engine and has an AMG-tuned seven-speed double-clutch transmission and 4MATIC all-wheel-drive system, and AMG suspension, steering brakes, body styling and interior trim.

The CLA 45 will get its public unveiling at the New York show at the end of this month and go on sale in the UK in the autumn.

It features the same drivetrain as the A 45 AMG and, if the price difference between the mainstream A-Class and CLA is maintained, is likely to cost around £40,000.