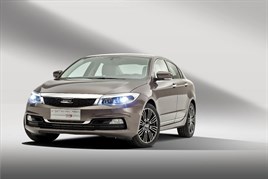 The brand made its debut at the Geneva Motor Show in March and will make its Chinese debut at the Shanghai Motor Show this month, before going on sale in its home market in the second half of 2013.

The first European sales are expected to start later this year.

The brand will launch in Eastern Europe first but a UK introduction could happen within the next four years and when it does arrive, Qoros believes it will be doing battle with Volkswagen and Ford.

Qoros (pronounced chorus) is a joint venture between China's Chery Automobile and Israel Corporation. An international team made up of 25 people based in Shanghai are running the business, with executives from Fiat, Tesla, VW and former JLR and BMW engineers, as well as ex-Mini head of design Gert Volker Hildebrand. The head of the plant in Shanghai formerly worked with BMW's factories in China.

Daniel Backman, Qoros product strategy director, spoke to AM at the Geneva Motor Show, where it launched its G3Q C-segment saloon, as well as G3Q Cross and estate concepts.

Guo Qian, Qoros chief executive, said: “Qoros has sparked great interest among distributors and dealers worldwide, and especially in Europe, who are eager to represent the brand.

“However, the praise at the Geneva Auto Show was just a first step on our path to success. I look forward to our presentation at the Shanghai Auto Show even more, because this will be Qoros' first appearance on the Chinese stage.

“We are committed to creating a distinctive auto brand, with quality as our foundation. We will bring top-level products and services to customers in China and worldwide.”