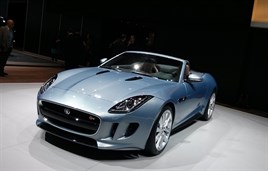 Jaguar's new F-Type roadster will be a low-volume car, despite the interest it has generated, because of the complex manufacturing process for its single-piece all-aluminium bonnet.

The capacity of the company which supplies the car's electrically folding cloth hood also limits the number of cars Jaguar can make at the moment.

It would be possible to ramp up hood production through extra investment at the supplier, but there is no possible short-cut to speed up the manufacture of the vast clamshell bonnet, says global brand director Adrian Hallmark.

The F-Type is built on the same line as the XK coupe and convertible at Jaguar's Castle Bromwich plant in Birmingham, and the theoretical combined annual production of the three models is 15,000 units.

Hallmark says there is "almost infinite flexibility" in the way production can be shared out, but currently no way of expanding the total.

Half the first year's production of the F-Type is already sold, so anyone ordering a car today would not see it until the autumn.

Hallmark says 80,000 people have registered to be kept informed about the car and a quarter of them have said they want a test drive, including 2,000 in Germany.

He said: "Interest is huge in the United States and big in the UK. We have had way more interest in this car than for any launch we have ever done before,&quot; he adds.

"It is similar to what Land Rover experienced with the Evoque."

The 12-minute film, called Desire, will star Damian Lewis and has been created by Brooklyn Brothers and Ridley Scott Associates, with music by Lana Del Ray.