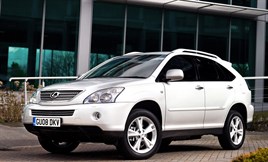 Glass’s has announced its league of fastest selling used cars, and this month sees the Lexus RX400h swooping in to re-take the top spot, followed closely by Land Rover’s Discovery 4.

The top 10 currently shows four out of 10 models as off road vehicles, keeping 4x4s at the top of the charts for the third month running.

Rupert Pontin, chief car editor at Glass’s, said: “Lifestyle 4x4s and MPVs are very much the most desirable used cars on the market, which has been the situation since Christmas.

However, last month we saw a convertible taking the number two spot.  It’s fairly indicative of the weather – a bit of sunshine a few weeks ago meant people started thinking about summer, but with the cold spell returning and the weather remaining poor, off road vehicles are very much in pole position once again.

“The models themselves aren’t a surprise – Discovery 4 and RX 400h are all season favourites.  I would expect that most off roaders will start to fall out of the top 10 as and when the weather starts to improve, and then we’ll see a sustained increase in convertibles and roadsters.”

When it comes to the nation’s slowest sellers, Chrysler’s Ypsilon comes in last with an average of 111.9 days to sell, preceded by the Mitsubishi ASX at 100.4 days and the Chrysler Delta at 93.4 days.

Pontin continues: “A pattern is beginning to emerge with Chrysler’s Ypsilon and Delta still languishing.  The manufacturer generates good sales from its established products, but buyers are still failing to connect the Chrysler brand with B and C segment vehicles.  The problem with Chrysler is that the public do not associate it with small cars, and so I think bringing these models to the UK under the Chrysler brand was possibly the wrong move as the UK market associates these models with Lancia in Europe.

“What is a surprise is the entry of the Mitsubishi ASX, possibly driven by some new car promotional activity towards the end of 2012 which shifted used car customers into new cars.  Equally the Hyundai i40 at the bottom of the table is likely to have been affected by an increase in volume, many of which are the 4 door saloon variants, and these are often slow to sell in comparison to the faster moving estate variants.”