There has been a slight fall in the rolling 12 month return achieved by UK motor retailers for the first time since June 2012.

This slight dip, reflected in both the percentage return and the money earned, represents a check to the steady growth in dealership profitability seen in the past six month, according to ASE.

Mike Jones, ASE chairman, said: "The overall financial result for the month was only marginally down on the performance in February 2012. However, the continued strong new vehicle sales levels have produced a slightly greater drop in the return on sales.

"All eyes now turn to the key quarter-end month of March which will prove pivotal in determining whether the February result represents a blip or the start of a turnaround in the prevailing trend of improving profitability month-on-month."

Jones said: "Whilst concentration will be on the new vehicle sales results, with the used vehicle to new vehicle ratio continuing to fall, it is pleasing to see the steady growth in used vehicle return on investment.

"This is all being driven by enhanced margin with stockturn now stable, albeit at a historically poor average of 60 days. Whether this is being driven intentionally by dealers holding out on selling scarce stock until they obtain the price they want or luck as a result of the strength of the used vehicle market will only be shown once residuals start to drop once more." 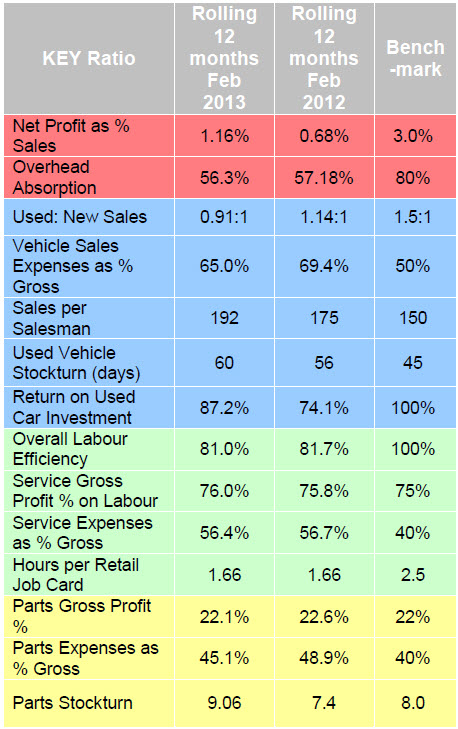