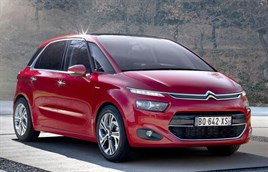 Citroen has revealed the first images of its new C4 Picasso which takes heavy influence from the Technospace concept shown at the Geneva Motor Show in March.

The new model will go on sale in time for the September plate-change and will come with a sub 100g/km engine.

While the C4 Picasso is 40mm shorter the wheelbase has actually increased by 55mm for slightly more interior space.

Boot space is increased by 40-litres to 537-litres and expands up to 630-litres with the rear seats pushed forward.

There will be various practical storage spaces inside the cabin for families, including an LED .illuminated compartments in the central dashboard with an AUX-in, USB port and 220V socket. Clutchless versions feature a  removable console, mounted between the driver and passenger seats with numerous other storage spaces under the seats and in the doors.

Other new tech includes Citroen’s 360 Vision system which uses four cameras around the car to give drivers a bird’s eye view, a rear view or a panoramic front view. Park Assist will also be available as an option for automatic reverse bay and parallel parking. Active cruise control, active seat belts and blind spot monitoring system will also be available.

Three diesel engines have been confirmed –an  89bhp 1.4-litre and two 1.6-litre diesels in 114bhp and 148bhp power options. The 1.4-litre has CO2 emissions of 98g/km and has the potential to hit 74mpg in combination with Citroen’s six-speed cluchtless manual.

An automatic six-speed gearbox will also be available from first-half 2014.