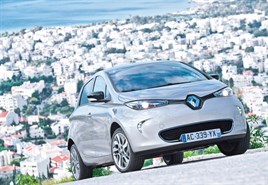 CAP is calling on Renault to “give some great electric cars a real chance” in the company car market by including battery with the price of its electric vehicle (EV) models, rather than leasing it separately.

Renault boss Carlos Tavares recently told AM-sister title Fleet News that he would consider dropping the lease of the battery separately if it was something customers wanted.

CAP has reaffirmed its decision not to forecast used values for Renault electric vehicles until the battery is included, rather than leased separately.

The issue has again surfaced after it was reported that Benefit In Kind tax rules for company car drivers will see the Renault Zoe’s battery replacement cost added to the car’s list price for P11D purposes.

That situation was described by CAP as “another nail in the coffin” of Renault electric vehicle prospects in the company car market under the manufacturer’s current approach of treating the battery as a separate entity from the car itself.

CAP has been in discussion with Renault for several years over the issue of forecasting used values for a vehicle for which the battery is leased separately from the car. CAP’s forecasters have maintained that it is not possible to forecast the value of a vehicle with no intrinsic source of power – likening it to forecasting the value of a conventional car with no engine.

Now tax rules revealed by Fleet News magazine have added to the challenges created by Renault’s approach by further weakening the commercial prospects for Renault EVs in the company car market.

Under the rules, which come into force in 2015, a company car driver choosing a Renault Zoe would pay BIK tax on the full list price of the car before the government’s ‘plug-in car’ grant of £5,000 is deducted.

On top of that the driver would also pay BIK on the value of the battery – understood to be currently £7,392 including VAT for a Zoe battery.

But the car user also has to lease the battery separately, a combination of factors which CAP believes many would-be business customers will view as prohibitively expensive.

CAP believes HMRC has made a fair decision by including the battery in the BIK equation and argues that Renault should reconsider its position as the chances of acceptance for Renault EVs in the crucial company car market recede further into the distance.

Martin Ward, CAP manufacturer relationship manager, said: “HMRC’s decision to base the BIK on the total is only fair, otherwise Ford, for example, could deflate the P11D value of a Mondeo by excluding the engine.

“Our frustration with Renault’s approach is based on the fact that we believe the Zoe is a very good car that isn’t getting a chance in the fleet market.

“We have every confidence in the quality and reliability of the Renault Zoe. We have seen it, driven it, lived with it and its 90 mile range means it definitely has a place in fleets for shorter range driving purposes.

“But until Renault removes the unnecessary layer of complexity caused by treating the battery as a separate entity to the car CAP will be unable to forecast its used values so fleets can work out competitive lease rates.

“And now it has emerged that HMRC is including the battery for BIK purposes the Zoe no longer has such an attractive P11D value for potential company car drivers.

“In our opinion it is now time for Renault to give some great electric vehicles they have worked hard to develop and refine a real chance in the company car market by abandoning its ‘battery not included’ policy.”