Lexus insists there's no place for diesel in its range 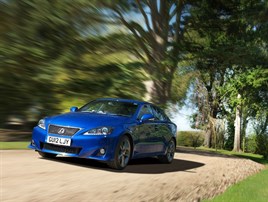 In the premium executive car segment it is deemed as madness not to have a diesel option - these engines account for the biggest share of the market.

Ask Lexus why there is no diesel for the new IS and the company will spin the question around and ask why some rivals don't have a hybrid option.

A petrol electric hybrid joins the IS range for the first time in the third generation model currently being rolled out. The diesel was dropped from the outgoing model a year ago.

Richard Balshaw, director of Lexus GB said: "Why hybrid? We say why diesel? We believe there are far more benefits from the hybrid set up. For one thing there is the smoother power delivery of a petrol engine along with lower noise, vibration and harshness.

"If you look at long term legislation, this powertrain already meets future requirements not just on CO2 but also NoX (nitrous oxide) and particulates which are far greater in diesels.

"There are also considerable benefits in kind considerations for the company car market with a CO2 figure of 99 g/km for the hybrid meaning savings on road fund licence, congestion charges and general running costs."

Could Lexus cave in some time in the future and bring in a diesel? Particularly as parent company Toyota has a deal with German premium brand BMW to supply them.

"No," said Balshaw. "Lexus has made a strategic decision to go down the hybrid route and not have diesels. That sets us apart from everyone else and it also means that across the range we have the lowest CO2 emissions in the premium segment."

As well as no diesel, Balshaw said there will be no estate version either. "Definitely no plans for that although other possibilities are being looked at - maybe a coupe or convertible."