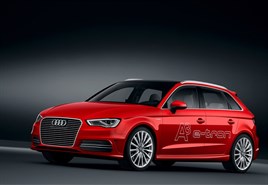 Audi will continue to develop every kind of electrified vehicle, despite appearing to turn its back on pure battery power with next year's A3 e-tron.

"There is nothing we are not interested in. We are looking into lots of alternative strategies and what would be suitable for Audi," says head of research and development Wolfgang Durheimer.

"We are investigating a lot with the fuel cell, and you will see an A7 with this kind of drive system in October although we don't yet have a date when it will be around for serial application.

"Our focus for now is with the plug-in hybrid. It is technology which will accompany us for a long time because it is a good solution," says Durheimer. "We also believe in the electric car. It will be limited for city applications, but you will see a pure EV from Audi."

Durheimer says Audi will also cash-in on its victory with a diesel-electric powertrain at last year's Le Mans 24-Hour victory race by advancing the technology to the production stage, but that the pace of development is being slowed because of animosity towards diesel in its major market, China.

Instead, the first electrified Audi will be the petrol-electric plug-in A3 e-tron to be launched in 2014. Initially, a pure electric EV was mooted, but Durheimer says plans were changed after customer trials with a battery-powered A1.

"We had to go through a period of knowledge gain to find the best solution for a premium manufacturer, and we found out that our customers did not want to lose out on all aspects of everyday transport," he explained. "They wanted to know they would be able to finish their trip, and said the car should not come with inconveniences like no trunk space or no room for four plus one passengers."

The A3 e-tron, which was revealed at the Geneva Show earlier this year, will be a "benchmark" plug-in hybrid, claims Durheimer. It will have a range of up to 37 miles on pure electric power plus an additional 550 or so from its 1.4-litre TFSI petrol engine, offer four drive modes and have CO2 emissions of just 35g//km on the official test cycle. Audi says it will be possible to recharge the batteries in two hours through a high-voltage socket.