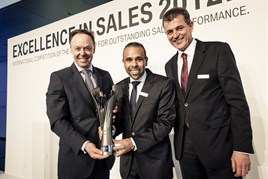 Rybrook Warwick has been named as the best aftersales operation in the world at BMW’s own ‘Excellence in Sales’ awards held in Munich, Germany.

Rybrook was chosen as the best dealership for aftersales in the UK against 140 other UK dealerships earlier this year which qualified it for the global competition.

Lee Beacon, dealer principal, accepted the award on behalf of Simon Birchall, aftersales manager and his team at Warwick at the awards ceremony held at the BMW.

The award was judged on performance in a number of key business areas with significant weighting on customer satisfaction.

Beacon said: “We are constantly working on ways to improve the customer experience.  We look forward to building on our success and once again achieving the highest possible levels of aftersales service in 2013.

“At Rybrook Warwick we are always working to ensure we live up to the brand and exceed our customers’ expectations and this award was very much influenced by our positive customer feedback.”

Rybrook Warwick was also BMW's UK Aftersales Dealer on the Year 2012 and also won AM's Aftersales Operation of the Year’ in 2010 and was a runner up in BMW’s ‘Excellence in Sales Awards’ 2011 .