Peugeot confident 2008 crossover will lead the segment in sales 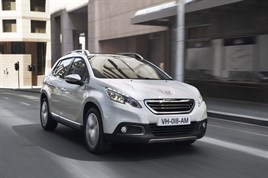 Peugeot believes that its 2008 has the right ingredients to become the best-selling B segment crossover, outselling Renault Captur and taking customers away from Nissan Juke globally.

Globally Peugeot will be building 650,000 208 and 2008 models a year, described by Marc Bocqué, marketing communications manager, as "a significant number."

While the B segment is dominated by hatchbacks with an 80 per cent share, their popularity is beginning to wane with the emergence of MPVs and SUVs; estate cars account for about 5% of the sector total.

The appeal of crossovers like 2008 and Captur is that they give the impression of being in a higher segment and most buyers will be existing B segment customers, according to Peugeot.

Renault has gone down the personalization route with Captur while Peugeot has concentrated on "style and quality," said Bocqué - adding "it will be a battle between us and Renault for sector leadership."

For the UK, the target is 8,000 annual sales, taking total 208/2008 sales to some 50,000 a year. The 2008's versatility is expected to appeal to business users with a prediction that more than 40% of sales will be to fleet users - the 207SW was predominantly sold to businesses with less than 30% bought privately.

The 2008 will also have a major role in attracting new buyers to the Peugeot brand with the UK forecasting that 65% of 2008 buyers will be buying a Peugeot for the first time.

There will be four trim levels, Access+, Active, Allure and Feline with ‘grip control' available on all Feline models and Allure models with 1.6-litre petrol and 1.6-litre diesel engines.

Grip control combines slightly increased ground clearance with ‘mud and snow' tyres and a traction control system which operates in snow, all-terrain and sand modes to limit skidding and provide maximum torque to the wheel with most grip.