New car trends: The biggest growth is from 4x4xfar 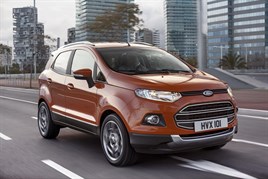 The news that Ford is to introduce a three-model range of SUVs – EcoSport, Kuga and Edge –demonstrates that the SUV market has now grown well beyond a single segment.

The situation is a bit like the origin of the hatchback: at first it was a niche made up of the Renault 16 and Austin Maxi, before it grew to dominate almost every sector.

In the case of SUVs, even the strictest definition gives them 11.9% of the market for the first quarter of this year, compared to 10.1% last year.

The SUV segment is now the third largest by volume, albeit a long way behind superminis and lower medium cars.

However, if you calculate the sector size by value, the high average deal price of an SUV narrows the gap considerably.

It is figures like these that are attracting the likes of Ford to a sub-segment of the SUV market. The introduction, in particular, of the EcoSport is a no-brainer.

A Fiesta-sized SUV-lite is ideal for people who want something small and affordable, and these B-segment SUVs avoid one of the disadvantages of larger SUVs. They carry no penalty in terms of accommodation.

The larger brother to the Kuga is a more interesting proposition.

When the first-generation Kuga was being considered by Ford, there was a lot of internal scepticism that Ford could successfully sell any SUV in Europe, following successive flops with the Nissan-based Maverick One and Mazda-based Maverick Two.

However, the SUV market is the one segment where non-premium brands are able to sell £30,000-plus vehicles in decent numbers.

For example, Hyundai and Kia sell large numbers of Santa Fes and Sorentos, whereas Korean executive saloons at that price would be unthinkable.

At present, about 40% of the SUV market is made up of compact models such as the Kuga or Tiguan. The next class up – executive SUV – is almost as large, at around 35%.

This class has two broad types of model: the first made up of prestige models such as the Range Rover Evoque or BMW X3; the second of larger models from non-premium manufacturers such as the Kia Sorento.

With sales of 25,000 so far this year, this class is one of the most attractive parts of the whole car market to any non-premium manufacturer offering a credible alternative.

There are many first-time buyers in this sector, so their buying preferences are more fluid than in more established sectors.

For example, someone who has had four BMW 3 Series models is unlikely to change to a volume brand, but someone buying their first SUV may be open-minded.  However, the cars do have to be suitable for Europe.

The collapse of Jeep sales in the UK in the past 10 years serves as a warning that simply shipping something big and American to Europe is no strategy at all.

In this context, the comments of Ford’s marketing boss, Jim Farley, are a bit worrying.

He has been quoted as saying: “No other company can touch Ford’s expertise, global portfolio and credibility when it comes to SUVs.”

Telling that to the country where Land Rover is based is tempting fate. Talking of Ford, the Edge is final proof that there will not be a new Ford Capri any time soon.

As the Americans say: “Do the math.”

Each sub-segment of the SUV market accounts for more than 2% of the total market. The whole of the affordable coupé sector is less than 1% of the market.

Given that most non-premium coupés have the lifecycle of a fruit fly it just does not make sense to put resources into such a car, when the potential returns are so much bigger elsewhere.

In any case, a stylish SUV appeals to exactly the same sort of people that would have once bought a coupé. For proof of that, just look at the Range Rover Evoque.