Nissan's new showroom concept to be piloted in Oxford 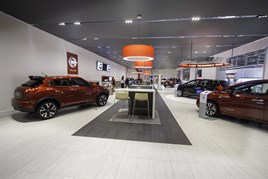 The Oxfordshire unit’s pilot blueprint for Nissan’s radically altered model for presenting, explaining and selling cars is mirrored by a similar facility in a Bratislava industrial estate, at the centre of the new Note’s current Slovakian launch programme, writes Hugh Hunston.

Up to 7,000 European sales and service staff will be “literally shown and re-educated on Nissan’s retailing future from mid July in Bratislava along with potential franchise investors and fleet customers” according to UK marketing director Giulluame Masurel.

Masurel said public responses to the new environment and technology would be monitored before the final format is devised, which he predicted would happen later next year, adding: “The process of applying it to the (204-outlet) UK network and wider European system may take a few years but Bratislava and Oxford are united in demonstrating our retailing future to dealers and customers.”

Bastien Schupp, Nissan Europe’s marketing vice president, said tablets would be used for model configuration plus ultimately ordering and arranging finance, part of a change in layout and emphasis that would transform the psychology of sales and service staff.

Schupp argued: “This is about being open and removing traditional showroom clutter. Too often customers generically have to get sales staff off their chairs, off the phone and out from behind the desk or PC barrier. Now you will be greeted when you walk in, neither ignored nor intimidated, with a single point of contact rather than be passed from one staff member to another.”

Individual cars will be spotlighted with topical models sitting below a Star Trek style silver disc or halo, within which red LED script highlights various features.

Masurel said tablets and wide plasma screens provided a more intuitive way of configuring specific models more graphically and rapidly. He added: “Customers spend six rather than two months researching purchases and the average number of dealership visits has fallen over ten years from five to 1.7. So you must engage them in a contemporary way.”

Schupp admitted that: “for too long aftersales departments have been rather grim, scruffy places so showroom and service department experiences should apply the same clean, efficient standards. There are a couple of steps to make before producing the final formula and perhaps people want more privacy when making financial arrangements. But rather than starting out with the deal and discounts staff will use the technology to determine what people really want and need plus how they use cars in their lives.”