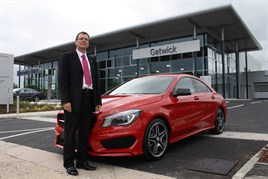 The new three-storey site has been built on the plot of a former go-karting centre at Manor Royal and the team of 65-strong workforce have now all relocated from the previous facilities at County Oak Way.

The showroom space for new cars has doubled in comparison to the previous location, with enough room for 18 vehicles. Customers will be able to choose from 60 used cars on site. There is also a dedicated AMG Performance Centre for the AMG line-up.

The service deparment now has 18 workshop bays and will be offering MoTs as well as a drive-through service reception.

Terry Bradshaw, Mercedes-Benz of Gatwick’s general manager, said that the move to a new site was long overdue but timed to coincide with the expansion of the model range and the popularity of the brand.

Bradshaw said: “The recent launch of the A-Class and the compact four-door CLA-Class are generating huge interest from drivers who may not have considered Mercedes-Benz before.

“With its close proximity to Junction 10 of the M23, the new site is better located and customers are impressed as soon as they pull in as parking is much improved over our current home.”