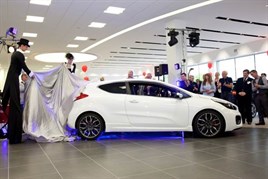 Bolton Kia, a wholly owned subsidiary of Kia UK, has opened its new showroom following a five month overhaul to turn it into one of the Korean brand’s red cube design concepts.

It is now the largest Kia dealer in the UK and Europe.

The original showroom opened in 2007 but has now expanded into a former Carpet Depot site next to The Linkway at Middlebrook Retail Park. Kia Bolton’s service department on Futura Park Aspinall Way remains in its current location.

The new site includes handover bays for customers to collect their cars, a 16 new car showroom and free wifi for customers.

Alex Purdie, dealer principal at Bolton Kia, said: “The possibility of doubling the size of our dealership is testament to how hard the team at Bolton Kia works together and how supportive the local community has been over the years.

“The opening events were a real success and we had a lot of fun celebrating with so many guests. Now, it’s business as usual and we’re looking forward to welcoming our customers into the expanded premises, offering them the family-like care and service that they are used to.”

The launch of the new showroom was attended by Kia UK chief executive and president Paul Philpott. The opening night also debuted Kia’s first hot hatch, the Procee’d GT, in the UK for the first time for one night only ahead of its launch in July.

To thank the community for its continuous support, Bolton Kia has committed to donating £5 to the Bolton Hospice for each of the 200 people that attended the showroom opening.