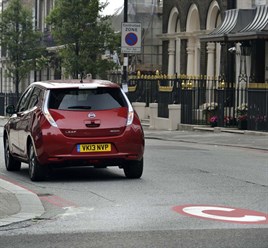 Changes to the London congestion charge come into effect today and electric vehicle (EV) manufacturers are hoping the maximum tailpipe emissions threshold of 75g/km will boost sales in the capital.

Drivers will now have to choose an EV or a vehicle which emits 75g/km or less of CO2 and meets Euro V emissions standards to avoid paying the charge.

TfL is expecting up to 20,000 drivers that avoided the previous threshold of 100g/km in small capacity petrol, diesel and hybrid cars will now have to start paying the £10 a day congestion charge.

Other changes to London’s scheme, which first came into effect in February 2003, include the removal of the option to pay the charge in shops and an increase in the level of penalty charge from £120 to £130.

Matthew Pencharz, the Mayor of London’s advisor on the Environment, said: “These changes are in line with the Mayor’s aim to improve air quality in London by reducing emissions from private vehicles and promoting the further development of low emission vehicles.

“We want to encourage the continued development of these technologies, while also protecting the benefits to traffic flow in the centre of London that the charge provides.”