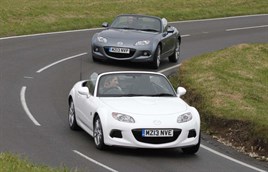 Mazda’s MX-5 has been named as ‘Britain’s most reliable new sportscar’ in the 2013 Which? Car Survey.

Achieving a reliability score of 97.4% (for models up to three years old) and 91.1% (models over three years old) the Mazda MX-5 claimed first and second places in the age-related categories.

The Which? survey reports: “For a sportscar that will last for years and won’t cost a fortune in repairs, head to your local Mazda garage. The MX-5 has the lowest number of faults and no annual repair costs in the first three years.”

For MX-5 models between 1998-2005 the magazine said: “The Mazda MX-5 is the automotive equivalent of a double espresso. Near-telepathic steering and handling make other cars (even some sportscars) feel woolly and dull by comparison. You can pick-up a decent used MX-5 for just £1,500. We suggest you do.”

The full results for all segments from the Which? Car Survey 2013 are available in the latest issue of Which? or to subscribers of the website.

Compiled annually, the 2013 Which? Car Survey was based on information supplied by more than 47,000 drivers relating to over 57,000 cars

AM Poll
Will e-scooters and micromobility reduce UK car ownership by 2030? Please leave a comment
Vote
View all
3213