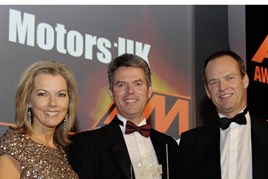 Kia is on the march. It set a new sales record in the UK in March, with 12,608 vehicles delivered to customers.

That saw the brand achieve its best first-quarter results since the height of the scrappage scheme in 2010 – an unnatural market when customers were given an attractive government subsidy to purchase that accounted for up to 40% of volume.

Within this, Kia sales to private customers are up 23% and it is now beating competitors like Citroën and Fiat in the retail market.

These figures mean the UK is responsible for 23% of Western European registrations in that first quarter, and of the European growth for the carmaker, Kia Motors (UK) accounted for more than 70%.

Scrappage gave the brand the boost it needed with its competitively priced, small car offering to a customer base that hadn’t stepped into a new car showroom for maybe 10 years looking to spend wisely on a safe option for perhaps as long as that again.

Since then Kia’s focus on design – with plaudit-winning designer Peter Shreyer at the drawing board, an industry-leading seven-year warranty and a new car in each of the prime market segments – has seen the brand transformed in the eyes of the UK car buyer.

Epitomising this position is the fact that its best-selling car in Q1 – and for the first time – was not the car that secured its present position – the Picanto, or even the Rio supermini, but the SUV Sportage.

Its success reveals the change in customer perception of the brand.

Kia Motors (UK) president and chief executive Paul Philpott (pictured centre) said: “During scrappage we appealed to the cost-conscious buyer and we built our brand on small cars.

“Sportage looks really good on the road, and the more you see the more people say, ‘what’s that?’

“It’s also in a growing segment.

"There are a huge number of Nissan Qashqais out there, but that’s obviously going into a run-out period.

“With Sportage, we’re finding a lot of success as a second car for families who have a premium brand as a first car.

"They may well have an Audi Q5 or BMW X3. They like the driving position of that.

Kia plans annual new car registrations of 100,000 units this decade (Philpott won’t be drawn on what year) and believes it will achieve 70,000 sales in 2013, more dependent on supply than customer choice.

Under its ‘Vision 100’ it plans to be a top five volume carmaker.

And this comes with challenges.

Philpott is certain Kia’s sales growth will slow due to its daily rental business being reduced deliberately by up to 25% this year.

After Carens there will be no all-new models for a couple of years – and there is uncertainty, though no lack of confidence, that the models that do replace the existing line-up have to exceed expectations for the majority of customers who have only the experience of buying and owning one Kia.

And there are issues concerning the required separation of brand perception between Kia and Hyundai.

“I’d like to see the sportiness of Kia accentuated even more.

"That doesn’t mean that every car needs to look like a coupé, but should reflect a modernity, sportiness and dynamism.

“Having established the core of the Kia brand, we can now start to push design to something that says actually this is really quite competitive now, not copying other brands, but being better. Kia will prosper this way.

"You wouldn’t use the words stylish, dynamic or fun for Hyundai, but premium, perhaps even luxury, as well as practical and versatile.

“If Hyundai is Volkswagen, then Kia is Seat.”

But he admitted customers will only agree with this once Kia has gone further on its journey as a sporty brand, demonstrated by the Prova concept at the recent Geneva Motor Show. Kia is also working on an SUV.

As the brand seeks to, as Philpott says, establish itself as a “mainstream player” after double-digit percentage growth in size other cracks began to show.

The Kia dealer network has grown from 140 retailers five years ago to 172, while its sales volumes have more than doubled.

The scale of individual dealer’s businesses has grown dramatically.

Capacity planning is a central part of Kia’s work, not least because the service parc, lagging behind the sales growth, is set to grow from around 220,000 cars now to 500,000 cars in  four or five years.

Investment is required to cope.

Dual or multibrand sites have it easier – they move the walls between the brands to give Kia more room, he said.

But there have been other problems that cannot be tackled with structural alterations.

When asked if dealers were up to meeting customer expectations, heightened by improved product quality, backed with a seven-year warranty, at competitive prices, Philpott said no.

“I’d love to be able to sit here and say ‘yes, we have a risk-free network, with everyone living up to expectations’.

"But that’s not the case. We have many where that is the case. We measure the hell out of how satisfied customers are.

"What we’re working hard with the dealer network on is management; it’s leadership and it’s culture.”