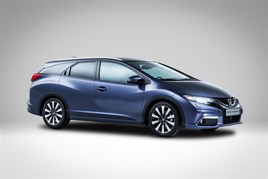 Honda has revealed its new Civic Tourer which will make its debut at the Frankfurt Motor Show next month.

The new model will be built at Honda’s UK factory in Swindon and will go on sale here early next year.

Adrian Killham, Honda Civic Tourer project leader, said: “We have achieved a best-in-class 624 litres of cargo space in a car that is only 235cms longer than the five-door Civic on which it is based.

“We didn't want to package this up in a boxy shape and I think we have achieved this as well.

"The Tourer has the same face as the five-door but there is a bold line from the A-pillar back to the D-pillar which creates the impression of a floating roof. This would have been impossible to achieve using the same rear doors as the five-door so these have been changed."

Wheelbase is unchanged, as is the front overhang, with the additional length behind the rear wheels.

Killham said: "As well as the exterior styling changes there have been a number of changes under the skin. We have added some 'weight' to the power steering, changed the dampers at the front and we have developed a new adaptive damper system for the rear wheels only, the first time this has been used on a production car."

Engine options will be the 1.6-litre iDTEC diesel first seen in the new Civic hatchback or Honda's 1.8-litre petrol iVTEC, although the diesel is expected to be the biggest seller.

The Tourer will go into UK showrooms early next spring said Lee Wheeler, head of corporate operations at Honda UK.

He added: "Around 70% of the fleet market for estates are diesels and the C-segment is dominated by the Ford Focus and Vauxhall Astra so we will be pitching the Tourer more against the likes of the Volkswagen Golf and Skoda Octavia. We will also be targeting D segment estates because we can beat them on cargo space as well."