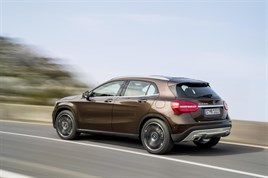 Mercedes-Benz has revealed the first production images of its new compact crossover GLA which will go on sale in November with first deliveries in 2014.

The GLA is the fourth body-style built on the new A-Class platform and will compete with the BMW X1 and Audi Q3.

Customers will have a choice of four-cylinder petrol and diesel engines equipped with either front ?or four-wheel drive.

The 4Matic models can be specified with a 168bhp 2.1-litre turbodiesel and a 208bhp 2.0-litre turbocharged petrol.

The GLA 200 CDI can achieve 65.6 mpg on the combined cycle, which equates to 114 g CO2/km (provisional figures). All the engines feature the ECO start/stop function as standard.

UK specification and pricing are still to be confirmed, but the GLA is expected to be priced from £25,000 with prices rising to approximately £45,000 for the top of the range AMG.