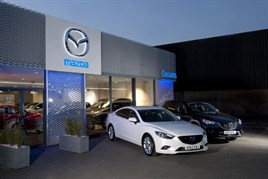 Four UK Mazda dealers have adopted the new corporate identity standards the Japanese brand is rolling out across its network.

Design inspiration for the new showroom design, which is being adopted across Europe, came from members of the dealer forum in Britain and several non-car retail outlets including Apple stores.

Jeremy Thomson, Mazda UK managing director, said: “There is more interest in the brand today than we have open points and the biggest problem is lack of suitable properties, not lack of companies wanting to take on Mazda.

“The focus has been on dealers being entrepreneurial about how to dress their showrooms, not us dictating.”

Thomson said the new showroom look had been designed to be flexible for dealers without being too expensive.

He said: “Dealers can choose different seating, desks and lighting. The flooring and desks that were introduced in 2004 remain the same if they want but all signage must conform to our new visual identity.”

Drift Bridge is a Surrey-based family firm adding Mazda to its Volkswagen and Audi outlets that they have run since 1974. It is the first time in more than a decade that Mazda has been represented in Croydon.

Beechwood is another family owned business which formerly held Subaru and MG franchises, while Stoneacre is a multi-franchise group with 29 national dealerships representing 12 brands.