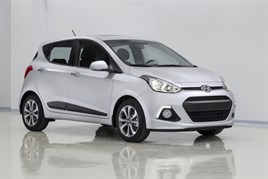 Hyundai has revealed its new i10 city car ahead of the Frankfurt Motor Show next month.

The latest model will go into production in September and replaces the current model which went on sale five years ago.

The new model is slightly longer (+80mm), wider (+65mm) and lower (-50mm) than its predecessor and the boot capacity has been increased by 10% to 252 litres with all seats in place.

As with 95% of Hyundai cars sold in Europe, the new i10 has been designed and developed at the Hyundai Motor Europe Technical Centre in Rüsselsheim, Germany. It will be built at Hyundai’s Izmit factory in Turkey.

The annual capacity of the plant, which already produces the B-segment i20 model, is rising to 200,000 cars, following a multi-million euro investment.