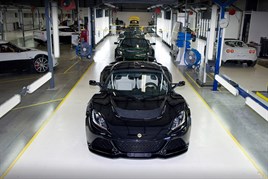 Lotus owners DRB-HICOM has said the brand is now in a position to work on future products and expand production following a period of "substantial change".

The business is recruiting 45 specialist engineers and 40 manufacturing operatives, along with 18 graduates to help aid its growth.

Lotus, which recently unveiled its latest model, the Exige S Roadster, employs more than 1,100 staff across the UK with its headquarters based in Hethel, Norfolk.

Aslam Farikullah, chief operating officer at Lotus, said: “We want Lotus to be at the forefront of the global automotive industry and for us to remain competitive, we will introduce more exciting products – there has never been a better time to be part of the future of Lotus.”

Lotus only registered 137 units in the UK last year (90% of production is exported), but has almost surpassed its total last year with 122 units registered YTD in July.

Lotus suffered through a period of drama last year when former CEO Dany Bahar was sacked following an audit into the running of the company and an unspecified complaint against him.

Rumours of Lotus’ demise then surrounded the company following a petition submission to HM Courts & Tribunals Service for the company to be wound up. Bahar was planning to build Lotus as a rival to Ferrari with an ambitious model launch plan which would see a new Esprit, Elite, Ethos, Elise and Eterne all launched before the end of 2015.

DRB-HICOM put the model launch plans on hold while it reviewed the Lotus business. Although Farikullah has indicated the brand is now in a position to move forward with new products, it is unclear how many models from the previous plan will make it to production.

A Lotus spokeswoman told AM: "We aren't releasing any details at the moment about future products.  We will be making announcements in the coming months though."