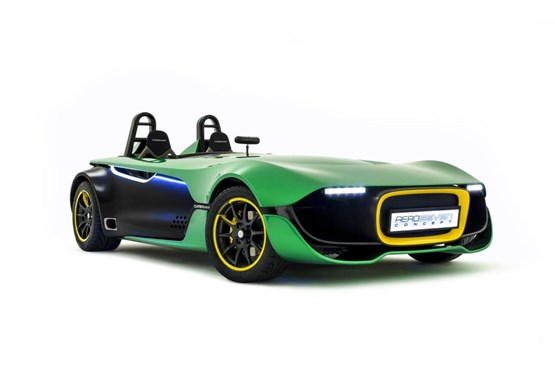 The new model plans follow on from the unveiling of the AeroSeven Concept. A production version is planned to be available in autumn 2014 and will be built at the Caterham Cars factory in Dartford, UK.

Caterham is also working on another sports car with Renault for the Alpine brand which is due on sale in 2016.

Fernandes, Caterham Group co-chairman, said: “Caterham has been a British institution for the last 40 years, and automotive secret in many ways, but in the very near future, the Caterham name will sit proudly on crossovers, city cars as well as a range of sportscars for everyone.”

Fernandes confirmed that while the brand will include mainstream crossovers and small cars, the intention is to also extend its ‘sporting heartbeat’ with a range of accessible sportscars for lifestyle buyers and thrill-seekers, a journey which has started with the AeroSeven concept.

Asia will be a key market for these new models. It’s not yet clear whether the planned model range will be available in Europe in the future.

At this stage, Fernandes is unwilling to be drawn on the number of cars Caterham is aiming to sell. He said: “We’re focused on developing the right products; with the right retail experience, in the right markets, at the right time. The sales will then come.”

The AeroSeven concept is the first Caterham with traction control functionality and launch control. Based on an updated interpretation of the Seven CSR platform, the carbon-fibre bodied concept vehicle, which will reach 100kph (62.5mph) in under four seconds, is powered by a EUVI-approved, 238bhp engine developed by Caterham Technology & Innovation for the recently launched Caterham Seven 485. Other engines could be developed for the future.

Graham Macdonald, Caterham Cars managing director, said: “Over the coming years, we will be expanding our range of sportscars as we look to meet the differing needs and desires of potential customers – from the lifestyle customer to the ultimate thrill-seeker.

“The AeroSeven Concept is the first model in that journey.”