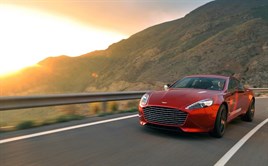 Aston Martin is the coolest automotive brand in the UK according to the annual CoolBrands list.

The luxury sports car manufacturer came second in the list overall, with Apple taking the top spot. Mercedes-Benz was the only other automotive brand in the list in 11th place.

The CoolBrands list, now in its 12th year, follows a vote by a combination of 3,000 consumers and a panel of 37 designers, style experts, media personalities and figures from the worlds of TV, fashion and music.

The company’s position shows a climb of five places over its 2012 CoolBrands debut.

Stephen Cheliotis, chairman of the CoolBrands Expert Council, said: “The brand qualities we examine in the CoolBrands survey – such as authenticity and innovation – can be key influences on consumer purchasing, so performing well is not just a thumbs up for a brand’s reputation, but an indication of its future success.”

AM Poll
How has the COVID-19 pandemic affected your attitude or mental health? Please leave a comment
Vote
View all
2795