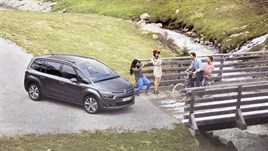 Citroen is making progress in raising its brand perception in the UK since the days of heavy-discounted 'cash-back' offers.

UK managing director Linda Jackson cited evidence including its DS3 range coming 4th overall in JD Power and a steadily improving performance in the National Franchised Dealers Association dealer attitude survey (see graph below) behind her claim that the brand is on the up.

Residual values have also improved by around four or five percentage points as new model lines have replaced old.

"Research tells us we're moving forward but there is still a long way to go," Jackson said during the media launch of the Grand C4 Picasso this week. It is reflected by a crucial change in Citroen's marketing of recent years, which now focuses on the brand and products rather than the price.

The spacious seven-seater Grand C4 Picasso, with technology such as a 12in HD screen, will go on sale in January here.

Citroen also confirmed it will launch in February a production version of its C-Cactus crossover concept shown at Frankfurt earlier this month, and which will be shown to the Citroen Dealer Council in November.

Jackson said the new models will play an important part in raising the new car throughput of the 180-strong Citroen UK dealer network.

Although Citroen's Picasso models have a loyal customer base, there is an opportunity for Grand C4 Picasso to bring in some new customers, and C-Cactus will have an even bigger opportunity as it is an additional line to the Citroen range, she said.