Is your car dealership ready for augmented reality? 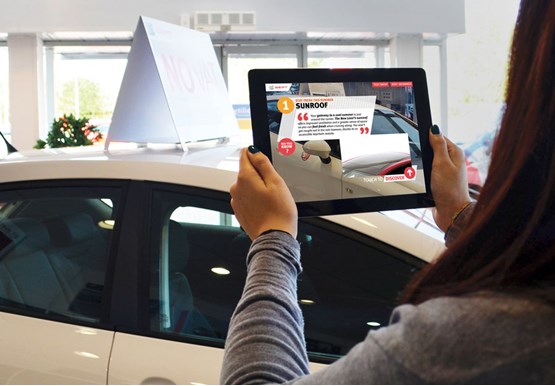 As car customers do more and more of their research online and the average number of showroom visits shrinks to 1.3, dealers have had to invest to keep pace.

Responsive websites, 24-hour live chat services and social media campaigns have all been rolled out  to entice customers to interact digitally with dealers. But is there a way to continue linking technology with the buying process once the customer comes into the dealership?

Josh Robinson, Sports Revolution director of creative and integration, recently told dealers at AM’s Executive Breakfast Club that his own buying journey would have been enhanced with augmented reality apps.

Robinson said: “I had heavily researched online and I just wanted some time with the brand and the product on my own to convince myself I had made the right decision.

“It would be ideal if customers could use technology they are comfortable with to learn more about the vehicle and its features.”

Augmented reality apps use the camera of a smartphone or tablet to overlay information, images, video and weblinks on top of static objects or printed pages. For example, the augmented reality version of this page will overlay buttons taking you to videos that explain the technology and its capabilities in greater detail.

Sales of tablet computers have reached more than 20 million in the UK and mobile internet usage is predicted to overtake PC usage this year. The influence of touchscreen technology on daily lives is clearly illustrated to anyone with young children, who now almost instinctively swipe any screen placed in front of them.

Many manufacturers have launched augmented reality apps which let customers explore features of the cars in the showroom at their leisure, either with their own smartphone or tablet, or one owned by the dealership.

Seat launched its new Leon in March 2013 supported by an augmented reality app, created through Blippar (the same technology used to create the interactive content in this issue of AM).

The app, which is free to download and works with both iOS (iPad, iPhone) and Android operating systems, uses markers placed around the car to trigger facts and imagery relating to the specific parts of the car being viewed.

Point it towards the bonnet, for example, and an image of the new Seat badge on the front of the forthcoming Leon appears on screen; move slightly to the left or right, and the user will learn about the new Leon’s LED headlamps.