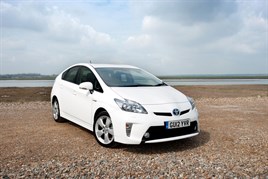 The Toyota Prius has topped Glass’s league of fastest selling used cars during August, taking an average of just 25 days to find a buyer.

The environmentally friendly model leads a family-orientated top 10, including favourites such as the Ford Focus, Vauxhall Zafira and Land Rover Evoque.

One point noted by Glass’s head of valuations, Rupert Pontin, was the almost complete absence of the big three German brands from the top 10 – except for the BMW 1 Series. “This is interesting, as it usually doesn’t make the top cut. Its appearance may be due to a reduction of the number in the trade at present,” said Pontin.

He also singles out the Land Rover Evoque for comment. “The demand for this car is phenomenal in both the new and used car markets. Used examples are hard to find in the trade and they sell quickly all year round.”

Among the top 10 worst performing cars in the league were the Vauxhall Adam, Vauxhall Cascada and Skoda Rapid Spaceback.

Slowest of all was the Mercedes-Benz CL-Class luxury sports car, which has been lingering on forecourts for over 91 days on average. “This is a surprise in some respects, as they are often considered to be summer fun cars - although high running costs and purchase prices could be the reason for poor performance.”

“As for the Vauxhall Cascada, if ever there was a time to rise out of the bottom 10, this would be it. But no such luck. The question is, what will Vauxhall have to do to find buyers for this car? The same goes for Vauxhall’s Adam, whose uninspiring looks and confusing model offerings, with an excess of personalisation, are the key to low demand from used buyers,” said Pontin.

He believes that the most likely explanation for seeing both the Rapid and the Rapid Spaceback from Skoda in the bottom 10 is that the company is looking to achieve a high retail price for a ‘new model’.

However, he also feels that the cars are slightly misunderstood and that buyers tend to see the Rapid as confusing when compared to the existing Octavia which itself is such a cost-effective family car.