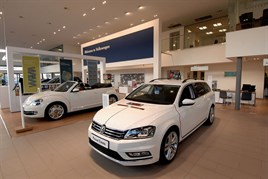 CitNOW’s video support service has been adopted by three quarters of Volkswagen UK’s retail network in the space of eight weeks.

After a successful trial of the CitNOW product last year, Volkswagen Video has now been rolled out across the whole network of 206 sites, with 143 sales departments already using the service and a further 10 having verbally committed.

In addition, 96 Volkswagen workshops are currently also utilising the service.

Volkswagen UK’s head of sales operations Ian Plummer said: “With many changes taking place across the retail process, we’re working to merge the ‘bricks with the clicks’, making sure that we add the warmth and the human element to the customer journey.

“When customers move from the online world to the physical dealership environment, they want the transition to be seamless. Using video is a great way to merge the two environments.

“The retail groups who did the trial were effusive about its benefits; they found that customers who received CitNOWs were much more likely to visit the dealership or put a deposit down than those who simply received an email or a letter.

“It’s personal and a great example of the way we can use technology to bring customers and staff closer together.”

The CitNOW system is simple to use, integrating all relevant information into a single page, with the average CitNOW taking less than 60 seconds to make.

CitNOW's chief executive Alistair Horsburgh said: “The adoption of CitNOW by the Volkswagen network proves that this isn’t just a service that benefits smaller businesses.

"The completely scalable nature of our product means that it can add value to every automotive dealer business, from small independents to the UK’s best-known car brands.”