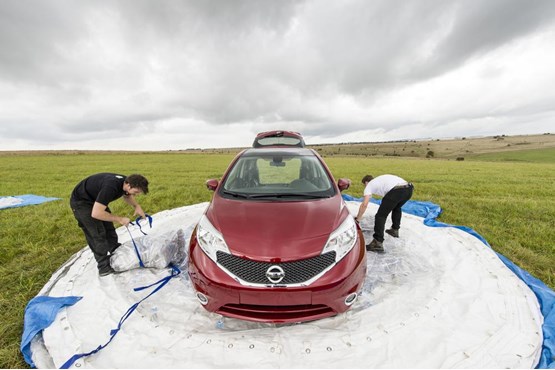 The ‘CarZorb’ was rolled down a course of steep hills to demonstrate the Note’s Safety Shield technology in a two-minute film released today.

Nissan took the popular pastime one step further and built a bespoke Zorb capable of holding the Note, measuring six metres in diameter and more than 18 metres in circumference.

The stunt comes as the all-new Note celebrates its first anniversary on Europe’s roads.

The Note’s Safety Shield consists of lane departure warning, blind spot warning and moving object detection and is powered by 360° around view monitor technology which relies on the unique self-cleaning rear camera.

Vice president of strategy and marketing Bastien Schupp said: “The Nissan Note has been carefully engineered to provide motorists with a whole range of technology that creates a protective bubble around you and your car. Our Safety Shield technology in particular is unrivalled amongst other small family cars.

“Creating a life size CarZorb to highlight the technology is an exciting and memorable way of reminding people about the benefits of Nissan’s Safety Shield.”

Watch it in action here: