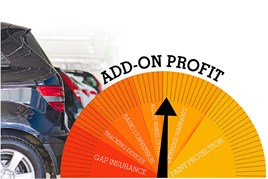 For years now, car manufacturers have attempted to exert more and more control on how franchisees run their own businesses. As a consequence, many dealers have looked to ancillary means to restore more control over their business’s profitability and to stand out from the rest of the network.

The deterioration of franchised dealers’ fixed margins on the new car sale has led to the sale of add-on products playing a crucial part in the earnings of every deal. Yet even this aspect of motor retailing is coming under scrutiny from both the Financial Conduct Authority (FCA) and from some individual vehicle manufacturers. It raises the question of whether profits from add-ons will be as strong in the years ahead.

Manufacturers get in on the add-ons action

One supplier told AM that three of its large dealer group customers have come under pressure from a manufacturer to switch to another supplier of its choosing, with the threat that they will lose parts bonus or standards money if they refuse.

The dealers involved are currently fending off the pressure. However, the supplier said this is an illustration of the interest that carmakers are now showing in dealers’ add-on opportunities too.

That viewpoint has been echoed by other suppliers, which are placing increasing importance on winning manufacturer approvals or recommendations. It suggests that if a particular add-on product is enjoying strong success, some carmakers are seeing their own earning potential in selecting a partner to sell their ‘approved’ version to the members of their retail network.

While manufacturer interference is an irritation for dealers, the immediate pressing concern is the impact that the FCA may have on the way motor retailers select and prioritise the add-on products offered in their showrooms. The FCA’s pursuit of “better customer outcomes” is already being made evident in its market study of general insurance add-ons and how they are sold. As a result, the FCA is convinced that selling a regulated insurance product as an add-on often leads to consumers purchasing products that are of poor value and not what they need. Research it commissioned concluded: “The ‘add-on mechanism’ weakens consumers’ ability to discipline firms by shopping around and comparing products effectively.”

‘We expect dealers will move on to non-regulated products’

The FCA is yet to consult on what changes it will implement to redress the “ineffective competition” it has identified. Meanwhile, many dealers are considering their options. As one supplier of a non-regulated add-on product told AM: “Depending on the outcome of the regulation, the emphasis for dealers on what add-ons they offer at point of sale will be strongly considered, purely because it will be a huge revenue loss that they will want to make up.”

Another added: “We expect dealers will move on to non-regulated products where they can optimise the profit opportunities of those products.”