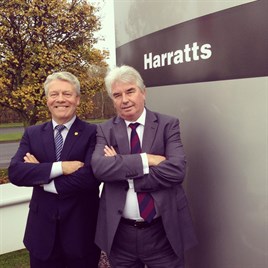 Two recent appointments by West Yorkshire-based dealer group Harratts are being playing a key role in the firm's revival in fortunes after a failed restructure.

The arrival of group operations director and chartered accountant Craig Fraser (pictured right) and the appointment of Wayne Bowser (pictured left) as non-executive director are contributing towards a turnaround after a challenging couple of years for family owned dealer group Harratts.

Fraser has had 35 years in the motor industry including an "established track record" in turning around struggling dealerships.

Craig said: "A combination of well-appointed facilities in good locations and the family owned nature of the business were the key reasons why I was attracted to this challenge.

"Communication is at the very core of everything I'm doing here. From improving customer service to keeping suppliers happy to ensuring we've got a well motivated and happy team of staff, I adopt an open door policy and it's all about using the right approach in order to get this business back on track.

"When a business is struggling communication is the first aspect to suffer. When staff, suppliers and customers all feel out of the loop you will almost inevitably go into decline. I'm only interested in the present and the future and getting to understand the minutiae of the business.

"We have to restore discipline, organisation and effective measurement of performance back into every aspect of our operations. Staff retention is critical to the success of any business and we're already seeing a big improvement on that front.

"In fact on one of my initial days with Harratts I was chatting with one of our valued sales team on his last day before he was due to move elsewhere. I communicated the vision we have for the business and he changed his mind and decided to stay.

"All of the major issues have been addressed or are being addressed on an ongoing basis and the initial signs are very positive.

"The strategic vision involves getting the right processes and systems in place, such as the incorporation of Dealerweb software, improved CRM, the establishment of staff training and effective motivational tactics, and then taking the business back to where it was. We envisage a very strong future over the next couple of years with growth definitely back on the agenda.

"Harratts is on the comeback trail," said Fraser.

He cites his time spent at Ford as a key influence on his approach as well as 'American Icon', a book by Bryce Hoffman that charts the revival of the US car manufacturer.

"It's an inspiring read and colours a lot of my thinking. It was a massive challenge for Ford CEO Alan Mulally to turn around such a giant of the motor industry, but it was achieved and reveals that anything can be done with passion, energy, creativity and a clear vision.

"Harratts isn't quite the Ford Motor Company but many of the same core principles apply here and are being applied."

He said: "I have long believed that in an increasingly competitive business environment that's high in uncertainty, the role of non-executive directors in the boardroom has never been so important.

Fresh thinking, high level corporate experience, sound investment advice and risk management are among the most important assets a modern business now needs if it is to flourish, he said.

"Equally important is a recognition that business is fundamentally about people and therefore the modern non-executive director must also have a proven track record in successful leadership, building relationships and communicating to one's colleagues.

"My role at Harratts is far more than merely raising the business's corporate profile or providing specialist advice; it is about working in a team and striving for collective goals. Being a successful non-executive director is about asking difficult questions but, more importantly, it is about helping to create the best solutions, too. Dedication, passion and mutual respect become the most important attributes one must possess."

Harratts' managing director Shaun Harratt said: "It's fair to say that our initial restructure last year simply did not work and we had to go back to scratch.

"Since then we've made key appointments in Craig and Wayne whose input and experience of turnarounds is playing a critical part in getting the business back on track."