Mussolini's mistress's car expected to fetch up to £1.9m 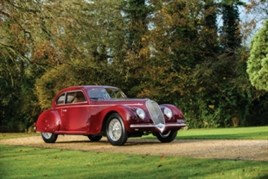 The car that carried Italian wartime dictator Mussolini's mistress on her ill-fated final journey is to be auctioned in Paris.

The Alfa Romeo 6C 2500 Berlinetta by Touring was given to Claretta Petacci by Mussolini for her exclusive use after it rolled off the production line in 1939.

Her chauffeur Franz Spögler confirmed the vehicle’s identity and its war-time use many years later and it is also understood from his documented recollections that this was the car that Petacci and other members of her family drove in convoy from Milan in a bid to find refuge across the Italian border in 1945, only to be stopped by partisans close to Lake Como. She was murdered, along with Mussolini, by her captors.

The car, chassis number 915033, was acquired by a US army officer after the war and shipped directly to United States.

Originally re-discovered in 1970 on a farm in New York State, it has been fully and faithfully restored in recent years by marque expert, Francesco Bonfanti. Its estimated sale price is between €1.9m and €2.4m (£1.5m - £1.9m). The auction takes place on February 4 at the Place Vauban.

“Few cars that have passed through our hands have had quite the important historical context that this Alfa Romeo can boast,” said Augustin Sabatié-Garat, car specialist at RM Auctions Europe.

“It played a role in one of the most important moments of the Second World War, and is a fascinating footnote in 20th century history. That it is also one of the most desirable of all pre-war grand touring cars and beautifully restored by the world’s leading marque expert, makes it an unbelievable prize for any serious collector.”