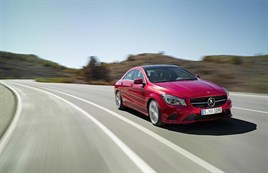 The best dealers have been recognised at the annual Mercedes-Benz Retailer Awards.

The awards identified those who strived to exceed the expectations of Mercedes-Benz customers.

Scooping the 'Service and parts team of the year' honour was Marshall Mercedes-Benz. Marshall has embedded a strong sales culture in aftersales whilst maintaining a focus on delivering outstanding customer satisfaction – recognised by a staggering 28 per cent increase in trade sales, said Mercedes.

The award for 'customer service team of the year' went to Listers.

In deciding the award, the judges felt the staff at Listers embodied a culture that always puts the customer first – resulting in a class-leading customer experience. Consistently top of satisfaction league tables and keen to resolve any complaints swiftly and professionally, the team at Listers reflects the customer-care values that are at the core of their business.

With a greater number of registrations in the UK in 2013 than ever in the history of Mercedes-Benz, the 'sales team of the year' category was particularly hard fought. The winners were Sytner in the North East – led by a strong management team focussing on the sales performance and a consistent, proactive sales process not only in ensuring the sale but delivering high levels of customer service.

The 'Smart retailer of the year' award went to Sandown in Dorset and Wiltshire. The judges recognised a strong leadership and focus throughout the senior management team in Sandown’s success in both new and used smart sales. Likewise, product knowledge and experience were the backbone of its solid performance, delivering exceptional market share results through its dedicated smart team – all backed-up by outstanding customer service on both sales and service.

The final award – Mercedes-Benz Retailer of the Year – was won by Drayton. Commended for its continued work to deliver an outstanding performance across sales and aftersales, with customer service at the forefront of its business. Drayton’s exceptional performance across the board was shown with its shortlisting in three of the other four categories.

Drayton Group was particularly commended for its work with customer service recognition; strong performances from its loyal new and used car sales teams; and, with aftersales, delivering outstanding customer experiences.

Mercedes-Benz UK and its dealers operate regionally and each company owns and runs a number of premises:

Sandown
The Sandown name started its relationship with Mercedes-Benz over 30 years ago and has a very proud heritage with the brand. The company owns six sites: Mercedes-Benz of Poole, Salisbury, Dorchester, Basingstoke, Hindhead and Guildford.