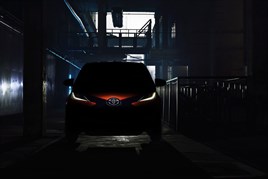 Toyota has teased the first image of its new Aygo ahead of the Geneva Motor Show on March 4.

The next generation Aygo is one of three partner cars between PSA Peugeot Citroen and Toyota, with the 108 already revealed, while the new C1 is still under wraps.

As with the current generation of the partner models, all three will be built in Czech Republic but more effort is being made to give each model its own individual style to differentiate from each other.

Toyota has said the new Aygo will give customers more customisation options to express their own styles.

It is likely the first images of the new C1 will be revealed in the next few days.

Toyota will also be showing its new hydrogen-powered FCV Concept at the Geneva Motor Show, as well as the FV2, a future mobility concept that explores new interactions between driver, car and environment.