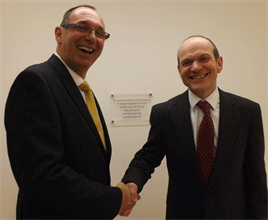 The opening ceremony was performed by Tony Whitehorn (pictured right), president and chief executive of Hyundai UK. Also there was Michael Turner, from Norwich City Club (Dingles is its official car supplier) and Rob Chandler from Radio Norwich, sponsored by Dingles Motor Group.

Since August 2013 Dingles Hyundai operated out of a temporary showroom in Norwich while the new £500,000 premises were being built.

Dingles opened its first Hyundai showroom in Lowestoft which was an open point for the brand in July of last year by moving into a showroom adjacent to the local Honda dealership.

All aftersales & administration functions are carried out at its Toyota dealership in Lowestoft.

To accommodate the increase in aftersales work Dingles has opened a new PDI/prep centre on the Norwich airport industrial estate just behind the dealerships.

This new facility will already add to its existing 11 bay workshop by having another four repair bays, MoT bay, four wheel alignment and two spray booths, one for ‘smart’ repairs and minor bodywork and another for the Linex franchise which it also holds for Norfolk.

Dingles operates three Toyota dealerships in Attleborough, Lowestoft and Norwich. It also has the Isuzu & Lexus franchises in Norwich.

John Dingle (pictured left), managing director, said:  “Although the Toyota brand was performing well we really needed another major brand to give us more critical mass, plus the comfort of not having the majority of their eggs all in one basket.”

> In 2009 Dingles won the AM Award for Excellence in Customer Service.